What is a frenectomy?

what is a frenectomy?

A frenectomy is a minor surgical procedure to remove or divide a frenum, a small ligament that regulates the movement of an organ or muscle group in the body. 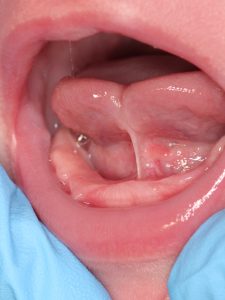 The upper labial frenum is a ligament that attaches the muscles of the upper lip from the inside mucosa to the gingivae (gum) above the upper central teeth. Where the attachment is high, occasionally running in between the two upper central teeth on older children, it is sometimes referred to as a lip tie. During breastfeeding, a restrictive ligament can affect a baby’s ability to flange their upper lip to create an efficient vacuum seal, often losing attachment, allowing air to be sucked in resulting in wind and reflux like symptoms. Due to their poor sucking action, these lip tied babies often don’t get an adequate milk intake, tend to tire easily and therefore tend to feed for longer time periods and feed more often making the problem worse.

The lingual frenum is part of a complex ligament structure that essentially attaches the tongue to the floor of the mouth and lower jaw. When this attachment is close to the lower central teeth this is commonly called being tongue tied. The tongue tied baby is restricted in the ability of their tongue to move fully with resulting reduced function.

Another term commonly used is a posterior tongue tie & baby lip tie. This is more a functional description rather than an anatomical entity; it describes the fibrous membrane just in front of the muscles at the base of the tongue that can restrict the movement of the tongue into the palate.

Traditionally lip tied and tongue tied babies had their frenum snipped with scissors or scalpels and allowed to heal forming scar tissue. The Perth Specialist Lip and Tongue Tie Clinic uses an Erbium LASER to essentially evaporate the tissue away without heat, leaving a sealed surgical site that then undergoes rapid healing. A small scab (slough) will appear over the wound which is usually white/grey in color. However, in very young babies who may still have a degree of jaundice, the ‘scab’ may be yellow tinged due to residual blood albumen bilirubin. Once the frenum is removed, the area will heal and remodel reforming to NORMAL less restrictive anatomy and position.